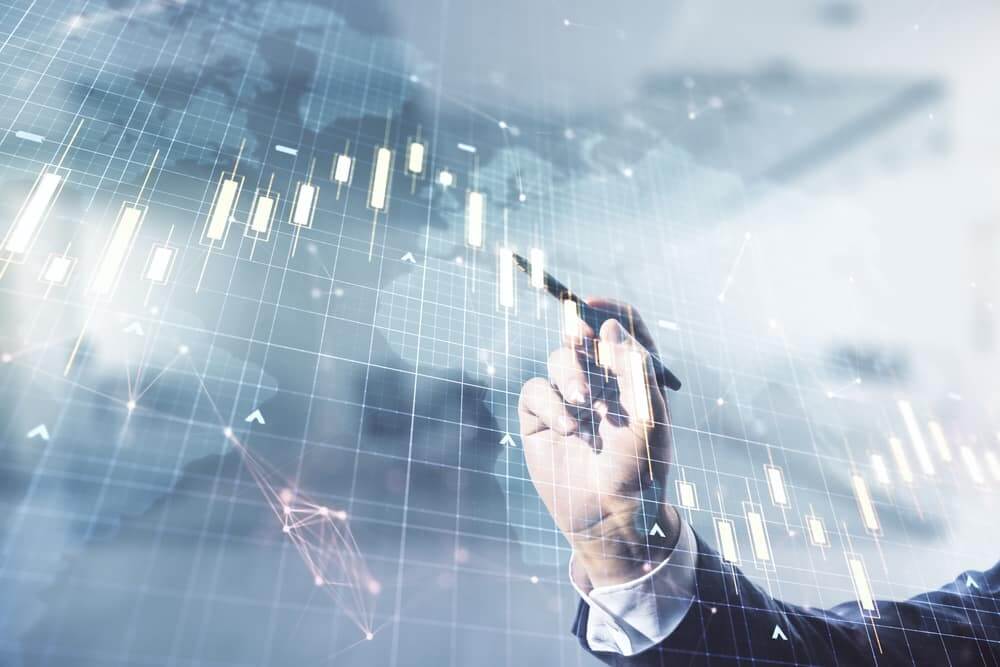 First and foremost, the forex master pattern is another form of technical analysis that provides a framework that will help you and other traders to find as well as follow the hidden price pattern that discloses the true intentions of financial markets. Importantly, this algorithm here does a good job detecting Phase 1 of the Forex Master Pattern cycle, which is the contraction point (or Value). In the case of Phase 2, we get higher timeframe activation (also called Expansion), which is where the price oscillates above and below the average price defined in Phase 1.

Importantly, Phase 3 is where we get a sustained deviation from the value (the Trend).

In a brief period of time, you will start noticing this pattern, even on naked charts. Don’t worry; it is all a matter of training your eyes – the more time you invest studying the charts with this indicator, the faster you will become familiar with this method.

One interesting detail: This indicator DOES NOT REPAINT. So, you can safely study the chart historically because what is printed historically is what prints in real-time.

Do you know why do traditional-based indicator systems fail over time? They fail because the markets move in cycles that constantly change the structure. Those traditional systems must be regularly optimized and settings tinkered with because of the changing market environment. There is a limitless number of variables that influence price, so no exact technical system can work the same perpetually, which is also the reason why most bots/EA fail.

You need to remember that if you learn to identify the forex master pattern and comprehend the succession of the real cycles that drive the markets, you can more correctly forecast market behavior. However, by using traditional indicators, you end up masking this pattern.

How does this indicator work?

After noticing a contraction point, a minor box, as well as an expansion line, start printing on the chart. Notably, it is your 1st heads up for a potential new master pattern origin point. By default, the minor box we mentioned above is invisible, and the minor expansion line is a dotted white line.

Don’t forget that if the minor box is verified as a major box, a blue box will emerge on the chart with a thicker solid white line projecting from it and, moreover, a buy or sell liquidity line (it counts on which side confirmed the box as major) from the lowest or highest price after the major box. There is no need to panic; you will understand it better when you replay it on the strategy tester.

However, just because an expansion line stays as minor doesn’t mean you ignore it or it’s not important. So, it is just that the algorithm was coded in a way to showcase more significant points. It was done like this in order to avoid too many major boxes/lines on the chart, which would only lead to confusion. Moreover, you have to learn to spot when a minor expansion line is, in fact, a good origin point.

What you need to know about forex chart patterns

By fine-tuning common as well as simple methods, traders can develop a complete trading plan using patterns that regularly happen and can be easily spotted with a bit of practice.

For instance, head and shoulders, candlestick, and Ichimoku forex patterns all provide visual clues on when to trade. While the above-mentioned methods could be sophisticated, there are simple methods that take advantage of the most widely traded elements of these respective patterns.

While there are several chart patterns of different complexity, there are two common chart patterns that occur frequently and provide a relatively simple method for trading. Notably, these two patterns are the head and shoulders as well as the triangle.

This pattern is tradable as it provides an entry-level, a stop level as well as a profit target.

For example, some market participants only choose to trade during uptrends. These “long” trend traders utilize numerous strategies in order to take advantage of the tendency for the price to make higher highs as well as higher lows.

More importantly, an upward trend provides investors with an opportunity to profit from rising asset prices. Remember that selling an asset once it has failed to create a higher peak and trough is one of the best, if not the best, ways to prevent large losses resulting from a change in trend. Some technical traders use trendlines in order to identify an uptrend and spot possible trend reversals. Notably, the trendline is drawn along the rising swing lows, helping to show where future swing lows may form.

While these tools may be useful in visually seeing the uptrend, eventually, the price should be making higher swing highs as well as higher swing lows to confirm that an uptrend is present. So, when an asset fails to produce higher swing highs and lows, it means that a downtrend could be underway, the asset is ranging, or the price action is turbulent, and the trend direction is hard to determine. In such cases, uptrend traders may decide to step aside until an uptrend is clearly visible.

Triangles are very common, especially when it comes to short-term time frames. They occur when prices converge with the highs and lows, narrowing into a tighter and tighter price area. Moreover, triangles can be symmetric, ascending, or descending, even though, for trading purposes, there is minimal difference.

What do you know about an engulfing pattern?

We must also mention that candlestick charts provide more information than line, OHLC, or area charts. As a result, candlestick patterns are a valuable tool for measuring price movements in all time frames. Although there are many candlestick patterns, but one is particularly useful when it comes to forex trading.

Moreover, the pattern is highly tradable because the price action indicates a strong reversal since the prior candle has already been entirely reversed. The trader has the ability to participate in the start of a potential trend while implementing a stop.

First of all, Ichimoku is a technical indicator that overlays the price data on the chart. While patterns are not as easy to distinguish in the actual Ichimoku drawing, when we consolidate the Ichimoku cloud with price action, we notice a pattern of frequent occurrences.

Many people might be unaware, but the “cloud” bounce is a widespread continuation pattern, yet since the cloud’s support/resistance is much more dynamic compared to traditional horizontal support/resistance lines, it provides entries as well as stops not commonly seen.

So, by using the Ichimoku cloud in trending environments, traders can often capture much of the trend. For instance, in an upward or downward trend, there are several possibilities for multiple entries (pyramid trading) or trailing stop levels.

The post What Is the Forex Master Pattern Trading Method? appeared first on forexinsider24.com.