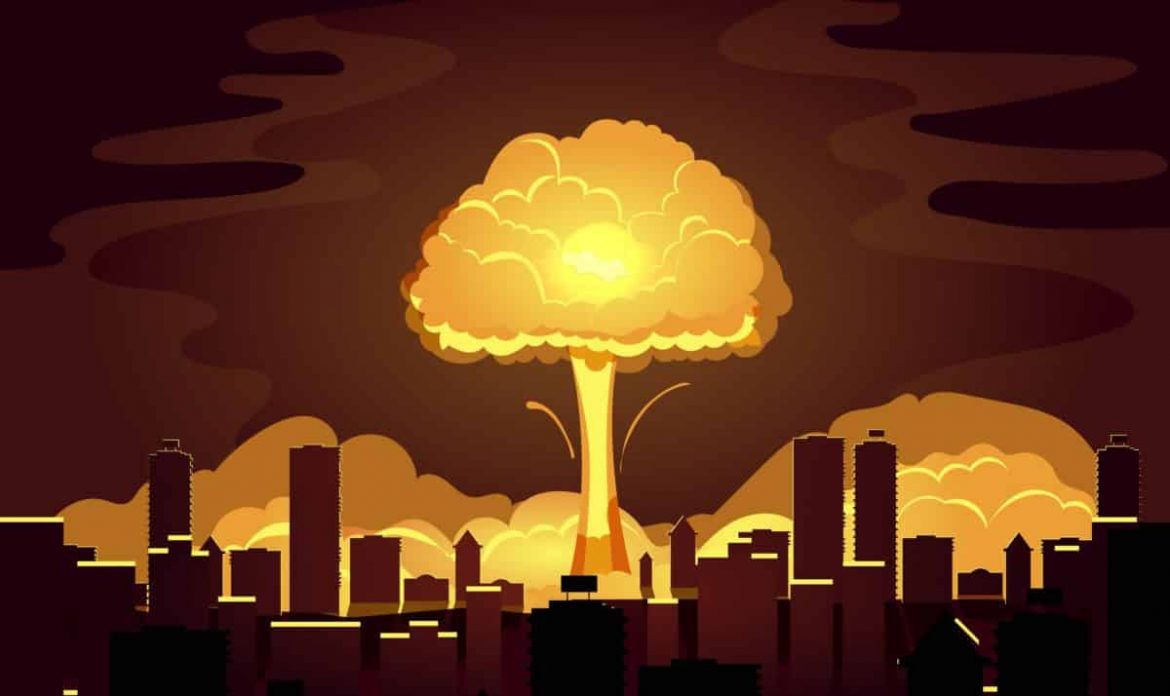 Since the beginning of Russia’s Invasion of Ukraine, the concern about the usage of nuclear weapons has been growing. The threat of nuclear war is probably the highest since the end of the Cold War. During the two months of the war, Russian troops failed to achieve any satisfactory results using the common types of warfare; therefore, Russia’s nuclear rhetoric is becoming more and more aggressive.

He also said that NATO is waging a “proxy war against Russia.”

“Now, the risks are very significant. I would not want them to be artificially inflated. There are many who wish. The danger is serious and real. It cannot be underestimated,” he said on the “Big Game” TV show on Russian Channel One.

Lavrov claims that the supply of arms to Kyiv by NATO member countries is a “proxy war against Russia.” The armed forces of the Russian Federation will consider the warehouses of these weapons as a legitimate target on the territory of Ukraine, Lavrov said.

“Of course, these weapons will be a legitimate target for the Russian armed forces, which are operating as part of a special armed operation,” he said. “If NATO, in fact, goes to war with Russia through a proxy and arms this proxy, then in a war at war.”

So, we can interpret this claim as Russia’s nuclear war warning. The only question is if Russia will really use a nuke, and whom will they nuke?

Russian troops managed to gain control over the city of Mariupol, the large town on the Azov sea coast. The large steel plant of Azovstal withstood attacks and bombardment with super heavy (up to 3 tones bombs).

Defense Intelligence Update (6 May 2022) claims that the complete capture of Mariupol is linked to 9 May Victory Day commemorations and Putin’s desire to show success in Ukraine.

Defenders of Azovstal use an extensive network of underground shelters and communications created during the cold war under the plant. The Soviet Union used to pay a lot of attention to civil defense – before the war, Azov Regiment fighters and metallurgical plant engineers renewed and upgraded the bunker system turning it into a real underground city – Ukrainian and western military experts claim that Russians may use tactical (relatively less powerful) nuclear warheads to destroy underground bunkers and to celebrate small victory over Ukraine.

How Many Nukes Does Russia Have?

Currently, Russia has the largest nuclear arsenal with 6,257 warheads, followed by the United States with 5,550 warheads. Russia’s nuclear stockpiles are yet the largest.

In the 1960s, the USSR adopted a wide range of different tactical nuclear munitions, including artillery shells for conventional caliber guns, warheads for tactical and anti-aircraft missiles, and warheads for anti-ship cruise missiles. The lack of information on specific types of tactical nuclear weapons makes it impossible to establish such exact characteristics and development trends. In the doctrine of the USSR, tactical weapons occupied an important place as a means of quickly developing the success of offensive operations and preventing them from the enemy.

There is a suspicion that in Crimea, the Russian Black Sea Fleet has always had tactical nuclear weapons. Russia also has a large arsenal of delivery systems, including ballistic missiles, cruise missiles, and aviation bombs.

The war in Ukraine showed that the armed forces of Ukraine could effectively resist the Russian army. The West has begun deliveries of heavy weapons to Ukraine, giving excellent chances for a turning point in the war.

But Russia has not yet revealed all its trump cards. Chief among them is nuclear weapons, the risk of which the United States has already publicly acknowledged.

The doctrine on the use of tactical nuclear weapons in Russia suggests such a thing as a “limited nuclear war” against NATO countries in Europe. And it is theoretically applicable against Ukraine.

According to it, the first strike is a “demonstration” in a deserted area. If the enemy does not agree to surrender, it is possible to strike a second blow, intimidating – also on a not very densely populated territory, where there are concentrations of troops and infrastructure nodes. And the third is already a blow to kill, that is, the beginning of this limited nuclear war.

There is a probability that Putin will perform a nuclear strike. Just to show what he can do. Like, “the Americans bombed Hiroshima and Nagasaki, so I can too.”

Also, for Putin, a “green light” for the use of nuclear weapons may be an attempt by Ukraine to de-occupy Crimea or any other sufficient Ukrainian advance.

The western governments have already imposed numerous sanctions on Russia. In the best-case scenario, the world will fully isolate Russia from the world as a whole if Putin decides to use an atomic bomb. In such a case, Russia will become the second North Korea – with closed borders and probably no internet.

The worst-case scenario is the nuclear war.

Let’s pray for peace and hope none of the leaders will use any mass destruction weapons again.

The post Is Russia’s Nuclear Rhetoric a Real Threat? appeared first on forexinsider24.com.